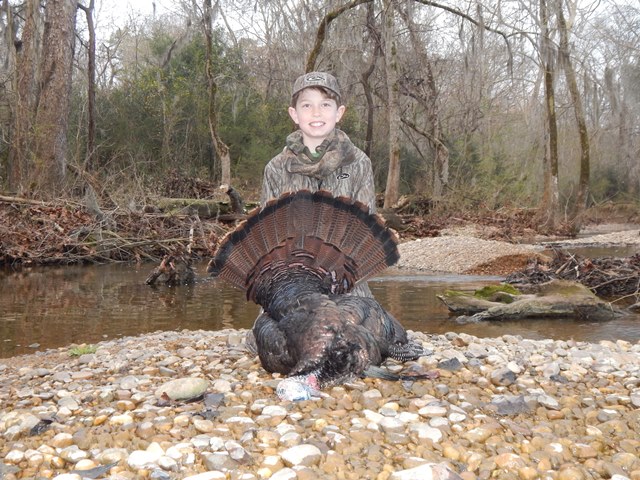 The Great Southern Land team started the 2014 Turkey Season off on the right foot. Great Southern Land Agent, Calvin Perryman and World Champion Turkey Caller, Sadler McGraw had the pleasure of guiding Sadler’s son, Will McGraw during the special early youth season March 8th and 9th. This group would be hunting on Calvin Perryman’s family land in Wilcox and Dallas Counties.

The morning of March 8th Calvin, Sadler and Will set out to hunt some turkeys that Calvin had located in a field a few days before, as it often happens the turkeys were nearly a half a mile away when day broke. After setting up on this group of turkeys it was evident that they were “henned up” and would not be willing to come to any calling that day. They decided to regroup and make another attempt at these turkeys Sunday morning.

Sunday morning this same group of turkeys was roosted in nearly the same location as the morning before, Calvin, Sadler and Will were able to move in and set up close on these gobblers before daylight. As day broke the turkeys gobbled very little, however when they sailed down into the pasture, they could not resist the temptation of the hen and jake decoys they had set just 20 yards away. Will made a great 30 yard shot on a big gobbler. This turkey was 19 pounds, had a 10” beard and 1” spurs. Take a child hunting whenever you can, they are the future of our great sport.

Is my dove field legal?

Turkey Fever (Part 1): Making Some Sense of the Gobbling Madness!

If you are a serious fisherman, you know the struggle is real for finding an ideal fishing buddy....